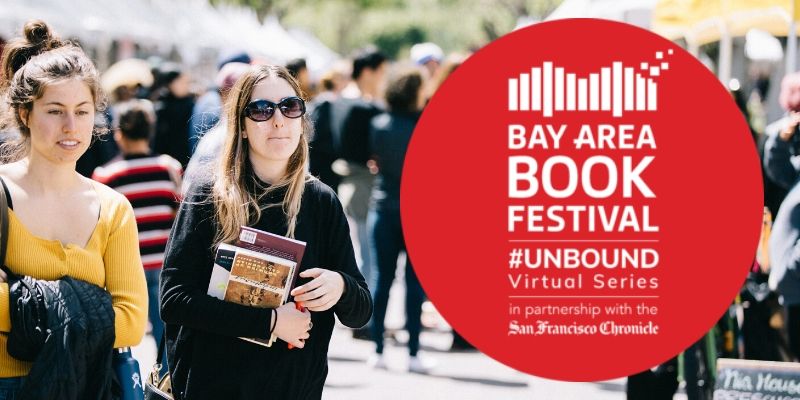 Resilience: “The ability of a substance or object to spring back easily into shape.” The Oxford English Dictionary could have been describing this year’s Bay Area Book Festival, because that’s exactly what they’re doing. Although the beloved festival only announced its cancellation due to COVID-19 safety concerns on March 11th,  festival director Cherilyn Parsons and her indomitable team have already developed an online alternative: Bay Area Book Festival #Unbound. The restructured event will feature several lecture tracks: voting rights (the original headliner for this year’s festival), health and wellness, and the power of literature during times of crisis.

Beginning on May 1st, virtual attendees can browse the Festival’s website to access #Unbound’s stimulating programming. Live Zoom workshops include “Vote by Mail,” a voting rights discussion with New York Times editorial board member Jesse Wegman, author of Let the People Pick the President: The Case for Abolishing the Electoral College and Amber McReynolds, co-author of the book When Women Vote. “Restoring Democracy,” an additional panel with Carol Anderson, Jeff Fleischer, and Elizabeth Rusch, educates young adults about the American election cycle, why voting matters, and how they can participate.

Health and wellness highlights include a panel on end-of-life planning with local COVID-19 expert Dr. Sunitra Puri and Shoshana Berger and BJ Miller, coauthors of A Beginner’s Guide to the End: Practical Advice for Living Life and Facing Death, as well as “Parenting in a Time of Crisis,” featuring psychologist and New York Times best-selling author Madeline Levine.

#Unbound’s literary lineup delves into diverse topics from mysteries to children’s creative writing and women’s literature. “Queens of Mystery: Writer-to-Writer with Rachel Howzell Hall and Meg Gardiner” is the first installment in the festival’s writer-to-writer conversation series, which will continue through the end of June. “Ready, Set, Write: NaNoWriMo Middle Grade & Young Adult Challenge with the Bay Area Book Festival” is a one-hour challenge for young creative writers designed to help them finish the first draft of a novel. The Festival’s year-round Women’s Lit program will debut its virtual version, Women’s Lit Lunch Hour, with a conversation between novelist Chelsea Bieker and Brooke Warner, publisher of She Writes Press and SparkPress.

Streaming events through Zoom or posting interviews to YouTube might seem straightforward enough, but the Bay Area Book Festival is aiming higher than spur-of-the-moment uploads. Director Cherilyn Parsons recently paused from her flurry of planning to chat with the San Francisco Book Review about what to expect from #Unbound, as well as what emotional support readers and writers can offer each other during the COVID-19 crisis.

Edited excerpts from the conversation appear below.

SFBR: Your cancellation statement came out pretty recently. Can you tell us about everything that went into the original festival?

CP: Yes, it came out March 11th, and we were supposed to go live with the schedule on March 20th. We start planning the year’s festival in the previous July actually, because you have to book the authors that far in advance. We were watching the news, and were hugely concerned about public health, and not wanting to risk anyone. We’re a nonprofit festival and this is a public service, and the last thing we would want to do is create any kind of risk. At first, a few days before the full cancellation, we had decided internally to cancel the outdoor festival. We have a big outdoor fair, which has a San Francisco Chronicle stage which seats about 650 people, we have a big children’s area, then we have a couple hundred literary exhibitors, and then we have a bunch of literary programs which are indoors. First we canceled the outdoor fair, but it became clear that we just had to cancel [the festival]. But we wanted to make sure the authors heard from us before they heard about it on Twitter. Same thing with the exhibitors. There’s a lot of constituencies: our board, major donors, the venues. It’s like a thousand people directly involved in putting on a festival like ours. These are our partners, and we wanted to communicate to everyone.

SFBR: Your original cancellation statement pointed participants toward the 2021 festival, so it’s amazing you’re developing an online festival on such short notice. Can you tell us what to expect?

CP: We previously had 265 authors and 130 programs, and there’s no way we can do all of that online. We respect the authors so much that we want to give them a really solid platform and high production value. So rather than putting two people up in front of laptops with Zoom and then slap it up on YouTube, we wanted to prepare them and make sure of the lighting and sound, so we have now a full system and platform for doing high-quality production for the sessions. We’ll launch it on May 2nd and 3rd, and we’ll likely do one live event on Saturday night that would a fundraiser, but I don’t know all the details yet. We’ll probably do the first program on the Friday night before the festival weekend [the 1st], then we’ll have a kids’ program on Saturday morning, then the fundraising top-billed, author head-liner event that Saturday night, then another kids’ event on Sunday morning, then another event on Sunday night. And then the plan is to go to Tuesdays and Thursdays, probably around 7pm, festival events, and then we’ll do kids’ events. And we’re trying to figure out still the best days, whether like a weekday, or a Sunday morning is a best, but we’ll have at least one kids’ program a week as well. We’re planning to continue through July at least.

SFBR:  Something that stood from last year’s festival was your author interviews that were led by kids and high schoolers. Is there still going to be a chance for kids to do that this year?

CP: Absolutely! We would welcome engagement on that front. So there are these four areas of the Festival this year: There’s the Voting Rights, Wellness, the pure Literary, and then the fourth area is Children’s. And we are looking at the same kind of thing that we were going to do at the Festival, which is picture book writers doing story times with the kids and little performances. And then [we’re going] to have young people interview authors, middle-grade and YA. So exactly the same thing.

SFBR: How do you think readers and writers can support each other during this time? We’re used to FaceTiming friends and family, and many of us have attended the Festival in person. But this whole idea of connecting with your favorite author online, how do you see facilitating that inspiration?

CP: Books themselves seem like a very solitary, interior kind of experience. Usually it’s just you engaging with the book. When the writer is writing the book, it’s just the writer delving deeply into their own heart, soul, mind, what they care about, and then they channel that and put that on the page. They can write the book and read the book at different times and different places but you have this sort of amazing connection between two human beings: the writer and the reader. In a sense it’s already a little bit of virtual reality. You’re entering into this space, and yes, the “screen” is your imagination, and yet that’s sort of what reading is like. When we bring the author into a virtual space and the audience is there, it’s sort of “unbound,” to use our term for the festival this year, in that you can ask questions of the author in real time. And I think we’ll get to hear some of the magic that went into creating this book: how they wrote it, what they were thinking about, what some of the challenges were, what the inspirations were. And the fact that it is sort of live does give you a feeling of participating. For example, you can also do that chat on the right-hand side…I love those! It really creates a sense of community of people who are watching. So in many ways, the online experience offers something the in-person doesn’t offer. Even if we have a physical festival, which of course we hope we do, we’re planning to do this again next year.

Cherilyn Parsons may fill her answers with the pronoun “we,” but it’s obvious that the Bay Area Book Festival #Unbound owes its lightning conception to her own resilient innovation.  This same optimistic creativity led her to resign from her leadership role at the Center for Investigative Reporting and found the Bay Area Book Festival in 2015. Although this would have only been its sixth year, the Festival had already ballooned to 25,000 attendees, 250 authors, and 200 exhibitors as of 2019. This year’s guest list included literary stars such as Saeed Jones, Rebecca Solnit, Pico Iyer, Garth Greenwell, Lidia Yuknavitch, Percival Everett, and Terry Tempest Williams, several of whom will still appear in #Unbound’s online panels. If we can learn anything from Parsons and her resilient attitude, it’s that sheltering at home doesn’t have to be restrictive. We can reimagine ourselves and rediscover literature from inside our increasingly-too-familiar living spaces. And logging into the Bay Area Book Festival #Unbound is a fabulous place to start.